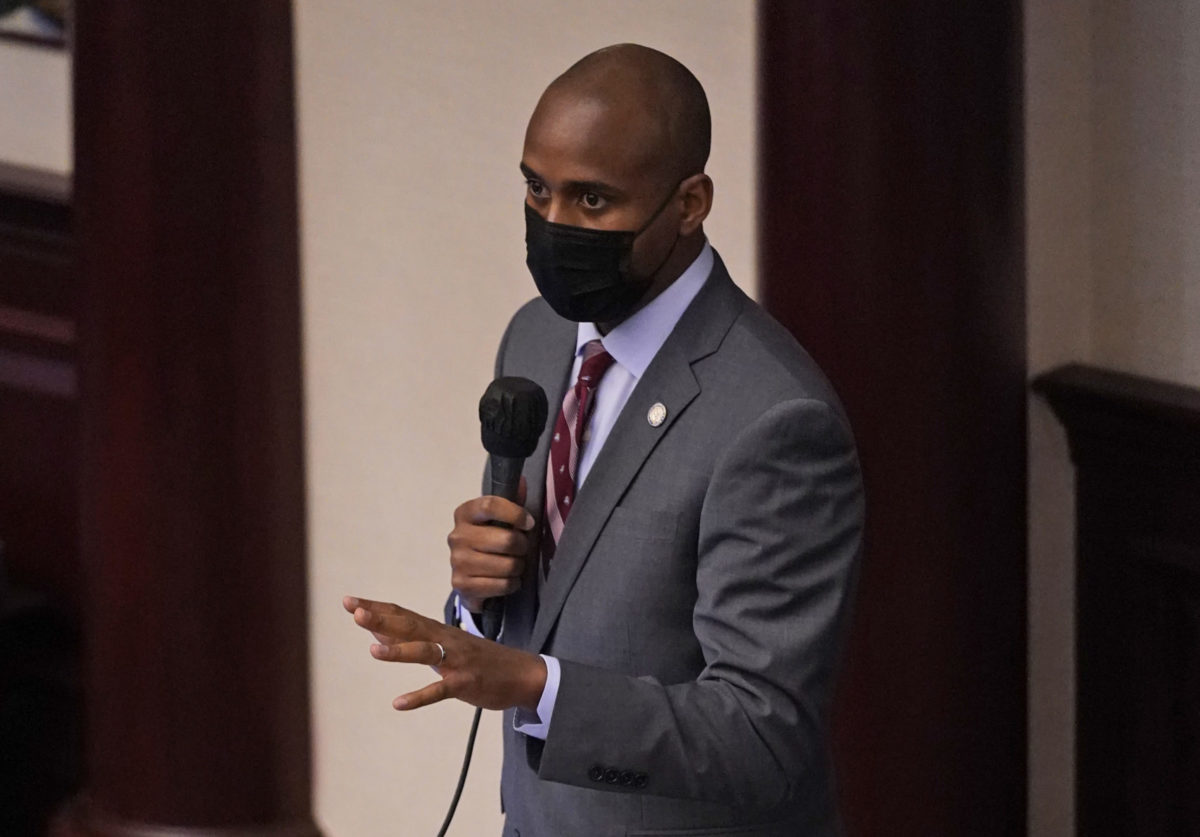 Democratic Majority for Israel is making a last-minute foray into South Florida’s special congressional primary, with just days to go until the Nov. 2 election.

On Wednesday, DMFI’s political arm released an attack ad hitting state Rep. Omari Hardy, a progressive candidate from Palm Beach County, over his opposition to supplemental Iron Dome funding as well as his support for the Boycott, Divestment and Sanctions movement against Israel.

“Omari Hardy supports the anti-Israel and antisemitic BDS movement,” reads the ad, which was published in the Oct. 27 print edition of South Florida’s weekly Jewish Journal. “Omari Hardy said he would have voted AGAINST funding for the lifesaving Iron Dome. Over 96% of Democrats in the House voted YES and EVERY Senate Democrat will vote yes. But Hardy announced he’d vote NO.”

The full-page ad features an image of Hardy, a 31-year-old Democrat, superimposed over a pair of rockets fired into the sky.

A source familiar with the effort told Jewish Insider that the print ad is one element of a broader independent expenditure aimed at opposing Hardy that DMFI intends to roll out in the coming days.

Despite resistance last month from eight House Democrats and one Republican, lawmakers from both parties overwhelmingly approved legislation that would grant $1 billion in supplemental aid for Israel’s missile-defense system known as the Iron Dome. The bill, which passed the House in a 420-9 vote, is currently stalled in the Senate.

For his part, Hardy came out against the funding in an interview with JI two weeks ago, arguing that the additional aid was gratuitous because the U.S. already provides Israel with annual installments of $3.8 billion guaranteed in a 10-year Memorandum of Understanding between the two countries. Hardy also supports conditioning aid to Israel.

Hardy disagrees with critics who argue that the BDS movement is antisemitic because it singles out the Jewish state for punishment.

In addition to the ad, the Jewish Journal, which is published by Sun Sentinel Media Group, also ran an opinion piece by a local rabbi, Alan Sherman, who suggests that Hardy’s position on Iron Dome funding is antisemitic because it exposes Israeli civilians to rocket attacks from Hamas.

When the article was published on the Sun-Sentinel’s website last week, its original headline compared Hardy to the “Hitler of South Florida,” but the epithet was quickly scrubbed after the Sun-Sentinel’s editorial board began getting calls and texts from readers who found the analogy offensive.

“Even though I consider myself a conservative Jew and pro-Israel and pro-Jewish, I said maybe that one reference needs to come out,” Alan Goch, who edits the Jewish Journal, told JI.

The article, now titled “Omari Hardy must be defeated,” still includes one reference to Hitler.

While Jewish voters in the district who have spoken with JI won’t go as far as Sherman, they have cited Hardy’s positions on Israel as a reason not to vote for him. Florida’s 20th Congressional District, which takes in parts of West Palm Beach and Fort Lauderdale, is mostly Black but includes a sizable and politically active Jewish community in Tamarac, home to the sprawling Kings Point condominium complex.

At the Kings Point “Tuesday Tables” event this week, where various clubs gather to make announcements and recruit members, some voters who passed by the Democratic Party table were troubled to find Hardy’s campaign literature alongside flyers for the other candidates in the race, according to Mona Malbranche, a former Democratic club president who was manning the booth.

“People were stopping at the table and saying, ‘Can you imagine, he doesn’t support Israel? Why do you have his paper here?’” she told JI. “I got an earful as to why I’m not throwing his card away.”

Hardy is the only candidate in the 11-way primary who has adopted a tougher stance on Israel. The other top contenders — including several elected officials at the state and county levels — have said they would uphold the pro-Israel legacy of the late Rep. Alcee Hastings (D-FL), the former longtime dean of Florida’s congressional delegation whose death last April created a rare vacancy in the district.

The primary winner is all but assured victory in the Jan. 11 general election owing to the district’s heavily Democratic makeup. Because there is no run-off, whoever prevails could finish with only a small percentage of the total vote count.

Hardy has struggled with fundraising and has failed to attract endorsements from leading progressives in the House who align with his views on domestic issues as well as Middle East foreign policy.

The Florida Democratic Action PAC, a new progressive group formed in August, launched a $102,000 TV ad campaign on Wednesday in a final push to boost Hardy’s candidacy. But it remains to be seen how much momentum he will gain from the cable ad buy with only six days remaining until the election.

DMFI’s late entrance in the race highlights the dearth of national attention from political action committees and Democratic leaders who have eschewed direct involvement.

DMFI wouldn’t comment on the record for this article.

The most recent special election for a safe Democratic seat, in Ohio’s 11th Congressional District, came to represent a high-stakes showdown between competing forces within the party.

DMFI took an active role in the race, spending more than $2 million as part of an effort to prop up Shontel Brown, a centrist county councilwoman and party chair, in a heated primary battle against Nina Turner, a progressive stalwart who had taken a more critical view of Israel. Brown defeated Turner by a margin of six points in a stunning come-from-behind victory on election night.

But a similar dynamic has not played out in the South Florida race as none of the candidates, most of whom are relatively centrist, have emerged as apparent frontrunners. Meanwhile, the local Jewish community, which in other elections might represent a coveted swing vote, hasn’t united behind a single candidate.

Even at the local level, the race has kept something of a low profile as polling sites throughout the district remain eerily quiet. Early voting began on Oct. 23 and ends on Sunday.

On a bright Wednesday afternoon at an early voting site in Fort Lauderdale, Sharief was campaigning amid the preponderance of lawn signs strewn along the grass. But few voters showed up as she took a moment to speak with JI about the state of the race.

“In-person voting is very slow right now,” she sighed, standing at the entrance of the African-American Research Library and Cultural Center on Sistrunk Boulevard. “Historically, one of the busiest polling places in the district is Miramar, and I think every day we’ve seen somewhere between 50 and 75 votes.”

Mulling why that was, Sharief speculated that voters are burned out after an exhausting 2020 election cycle, and because few in the district expected that there would be a primary so soon. “There was not supposed to be anything on the ballot for this year,” Sharief said, alluding to Hastings’s untimely death. “We are the only thing on the ballot, so it’s a draw, you know? It’s hard to get people to come out and vote.”

She expressed hope that turnout would increase over the weekend. But while Sharief remained optimistic about her own odds, she seemed dismayed by the lack of interest from voters.

“People have no clue that this election is going on,” she said.