Bloomberg to publicly call out antisemitism on left and right 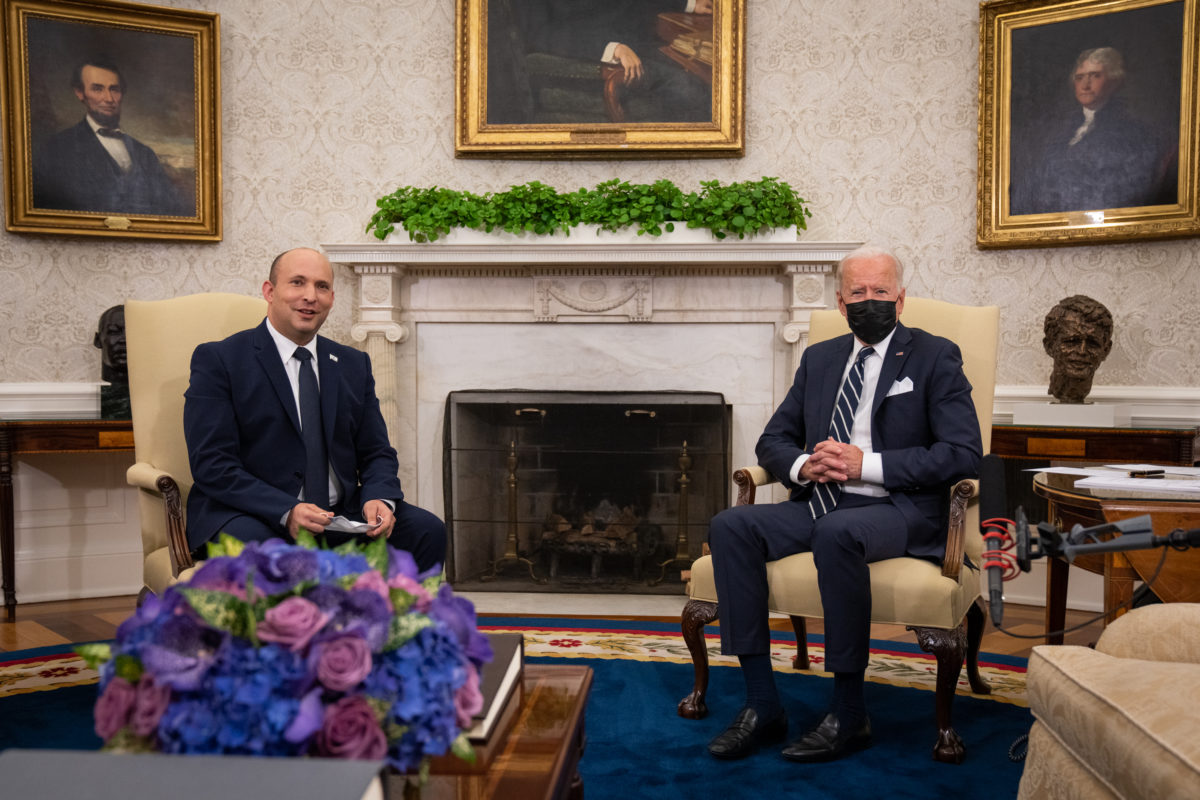 Amid the backdrop of the U.S. pullout from Afghanistan, President Joe Biden and Israeli Prime Minister Naftali Bennett held their inaugural meeting at the White House on Friday, discussing the threat from Iran and a range of other issues tied to the U.S.-Israel relationship. They emerged from a private meeting with a largely positive outlook for the bilateral ties, according to public remarks and accounts from Jewish leaders briefed on the discussions

On Iran — the central issue for the Israeli delegation — Biden said in joint remarks with Bennett, “We’re putting diplomacy first and seeing where that takes us. But if diplomacy fails, we’re ready to turn to other options,” and emphasized that the U.S. is committed to ensuring Iran never develops a nuclear weapon.

Press Secretary Jen Psaki declined to elaborate on the “other options” during a subsequent press briefing.

In his public remarks, Bennett, who was meeting for the first time with Biden, responded positively to Biden’s comments, although his government does not support the nuclear negotiations.

“I was happy to hear your clear words that Iran will never be able to acquire a nuclear weapon and that you emphasized that you’ll try the diplomatic route but that there [are] other options if that doesn’t work out,” he said.

The Israeli leader, whose meeting with the president was postponed a day because of the suicide attack Thursday at the Kabul airport that killed 13 U.S. soldiers, said that recent events in Afghanistan highlight the potential dangers of an empowered Iranian regime.

“These very days illustrate what the world would be like if a radical Islamic regime acquired a nuclear weapon — that marriage would be a nuclear nightmare for the world,” he said.

Bennett said he and Biden were in agreement that they must stop Iran’s nuclear enrichment activities and that they would be discussing “a comprehensive strategy” to stop Iranian regional aggression and permanently keep Iran from acquiring a nuclear weapon. The strategy reportedly involved a “death by a thousand cuts” strategy, including both military and diplomatic moves.

Speaking to Israeli reporters after the meeting, Bennett said that there is “isn’t a lot of time” to address Iran’s nuclear program, which is drawing closer to being able to produce a nuclear weapon.

“In our region, doing good is not enough,” Bennett said. “Israel has to be strong in order to do good. Be strong so we can do good. And we cannot lose sight for even one moment that we’re in the toughest region in the world… That’s why Israel always has to be overwhelmingly stronger than any of our enemies, and indeed of all our enemies combined.”

Bennett also emphasized Jerusalem’s position as “[Israel’s] eternal capital,” despite Biden’s plans to reopen the U.S. consulate in East Jerusalem, which has served the Palestinians, a bone of contention between the two countries.

Biden brought up the potential reopening of the consulate and the planned eviction of Palestinians in the Sheikh Jarrah neighborhood of East Jerusalem during the meeting, Barbara Leaf, the National Security Council’s senior director for the Middle East, told Jewish leaders on a call following the Bennett-Biden sitdown, two sources familiar with the call told Jewish Insider.

Leaf told the Jewish leaders that the two had a frank discussion about these issues, but declined to elaborate further, according to one of the call’s participants. She also said that the Biden administration is approaching Israeli-Palestinian relations carefully and not expecting a major breakthrough, but is trying to move both sides toward peace.

Another individual familiar with the call said, “Ambassador Leaf didn’t say anything that was at odds with what American policy is, but at the same time was operating consistent with what the goals of these meetings were, which was to try to establish that good working relationship.”

Bennett emphasized in his remarks that he sees Biden as a reliable partner for the Jewish state.

“I want to thank you for your warm words now and in our private meeting, which attest to your support of the state of Israel, but that’s not new. It’s been decades and you’ve always stood up for us, especially during tough times,” he said. “We trust in your support, Mr. President.”

Biden moved his private meeting with Bennett from the Oval Office to his private dining room, where the two shared coffee — a gesture seen by some observers as a sign of goodwill and positive relations between the two leaders. The meeting lasted around twice as long as its scheduled length.

Biden said he and Bennett “have become close friends” and that the U.S.-Israel relationship is “as strong as can be.” He further praised Bennett for bringing together “the most diverse government in Israeli history.”

Bennett told Israeli reporters after the meeting that he “found a leader who loves Israel, knows exactly what he wants and is attuned to our needs.”

A source familiar with the Leaf call told JI that Leaf confirmed in the call that it was a “very positive meeting.”

Unlike many other world leaders, “[Biden] doesn’t really know Naftali Bennett but they seem to have gotten off to a good start,” the source said.

American Jewish Congress Executive Director Joel Rubin, who was on the call with Leaf on Friday, told JI that his “big takeaway was that this was the establishment of a new relationship at the leader level” and that a “personal rapport was developed” between Biden and Bennett.

Israel Policy Forum board chair Susie Gelman told JI her impression was that Bennet and Biden had a “mutual interest in having a more positive relationship than what devolved in the last Democratic administration,” and that “if there are disagreements, they are not going to air them publicly.” She also said her “impression is that it was a very positive discussion.”

Nathan Diament, executive director of the Orthodox Union Action Center, who was also on the call, said “it seems that [Bennett] succeeded” in resetting relations with the U.S. “in terms of the tone and the atmosphere.”

“That’s a trend that I think should be encouraged, not discouraged, and we’re going to do what we can to be value-added,” Biden said. Biden added that the two would also discuss “advancing peace and security and prosperity for Israelis and Palestinians.”

Leaf told Jewish leaders that “paralysis” in Israel from the multiple elections and change in governments has kept the U.S. from doing more to advance normalization during the first months of Biden’s presidency, but they plan to push forward and look for further opportunities, one Jewish leader said.

Biden also noted that the two had discussed Israel’s rollout of COVID-19 booster shots, which the U.S. is set to begin in September. Biden said Bennett advised him to begin the program earlier and that U.S. officials are considering such a plan.

Bennett closed out his remarks by removing his mask and quoting from the weekend’s haftarah portion in the Book of Isaiah — the same book Biden quoted during his remarks on Afghanistan on Friday evening.

“The sons and daughters of the Jewish people are going to come back to our land, are going to nurse our ancient land and rebuild it. This ancient Jewish prophecy is today’s Israel[i] reality,” Bennett explained. “It’s a miracle that you’ve been so central and so part of it for so many years. And so, Mr. President, today you and I — and you’ve been so generous with your time in these difficult days — you and I are going to write another chapter in the beautiful story of friendship between our two nations.”

After his meetings at the White House, Bennett returned to the Willard Intercontinental Hotel to observe Shabbat in COVID-19 isolation. The entire Israel delegation, including reporters, was invited to join the prime minister for Shabbat dinner. The Chabad of Rockville, Md., provided a Torah and bima for Shabbat observance.

Bennett’s delegation departed at around 2 a.m. on Sunday because El Al could not service his aircraft until after Shabbat ended.