Freedom House’s Michael Abramowitz on the future of democracy 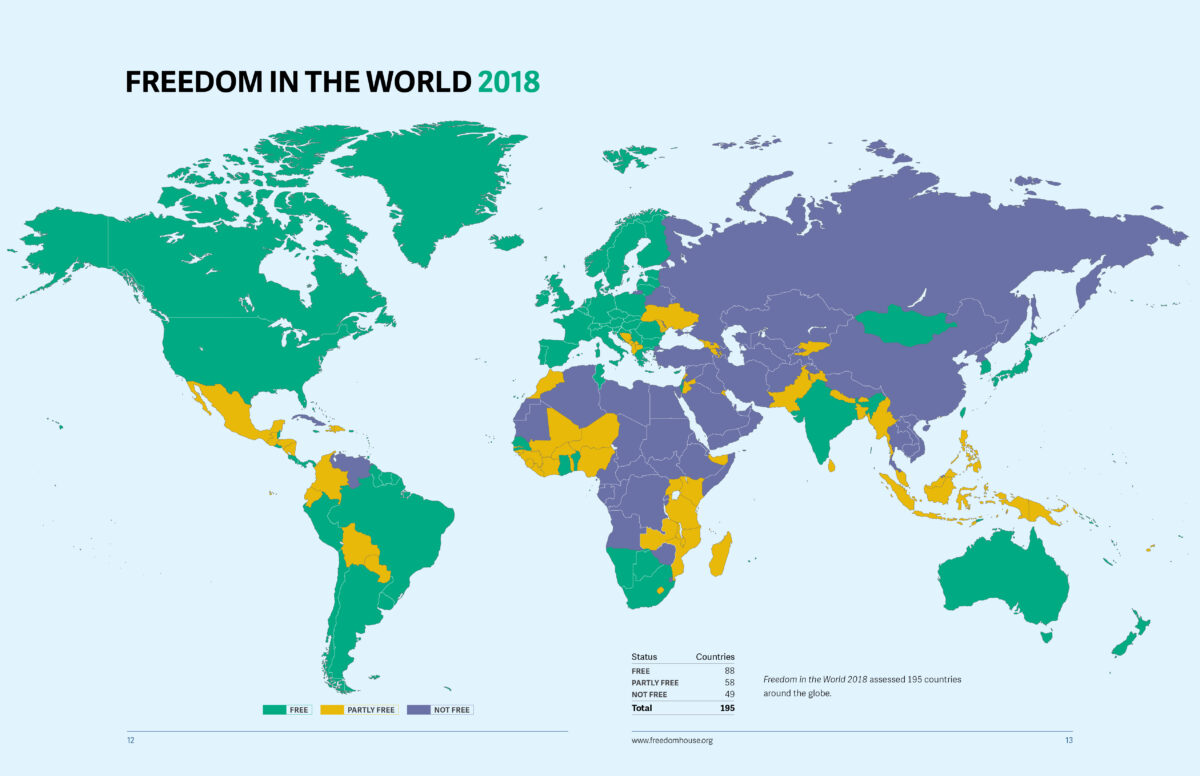 For Freedom House President Michael Abramowitz, recent years are a cause for concern. Their 2018 Freedom in the World report found that 71 countries “suffered net declines in political rights and civil liberties,” for the twelfth consecutive year of global decline. In an interview with Jewish Insider, Abramowitz detailed the work of Freedom House and the state of global democracy.

What are the signs that democracy is diminishing around the world?

“So this has been happening for 13 years. And what’s interesting is a global phenomenon is happening in every continent. It’s happening in authoritarian settings like Russia and China. It’s happening in countries that have kind of been moving towards more democratic and open systems like Turkey or Hungary. It’s been happening in the kind of the traditional West. Where interesting stats from our reports of sort of the 40 strongest democracies in the world, half of them have experienced some decline of liberal rights and civil liberties. So as a global phenomenon, I think it’s interesting to see when our new report comes out in the first quarter of 2020, we may be reaching a trough.”

What are the specific signs you look for?

“So we have kind of a methodology that we have created. Over the last 50 years it’s been refined, but it’s basically been the same for a while, where we look at 24 different indicators. Some are indicators of political rights, so the concept the free and fair elections. Then also civil liberties. So freedom of expression, freedom of association, freedom of religion. So there are 24 different indicators. And we put all these indicators online, we’re very transparent about our scores that people can see. And then for each country, we develop an assessment of how the country is doing, like in one particular indicators, like freedom of the press, and their questions that we asked for that and we have country experts who take an initial assessment of how a country did in that area. And then we review that and have other experts. So we try the consensus score of experts and staff for each country. And, and and then we then we come up with an aggregate score for whole country.”

For non-governmental figures, how does this affect our daily lives?

“Well what we think is that the scores, basically, offer a look at the level of freedom, you know, the political rights and so is enjoyed by residents of a particular country. So the higher the score, the more free you are, the lower the score, the less free you are. And, you know, freedom is a gradation. It’s not like a binary choice you have or you don’t, so I think it’s a way to assess the quality of the levels of freedom and the quality of democracy in a particular country.

I think it’s interesting, people pay attention to the scores. I’ve been at Freedom House a little more than two years, and I think it’s been gratifying to me and sobering to see that countries do pay attention to how they’re scored. You know, the first week I was at Freedom House, the foreign minister of Ukraine came to see me because he was upset about a particular aspect of our score. He was very friendly about it. But we had a very good conversation about it. We get countries come to us all the time, wanting to know why they were scoring this way and also what they need to do to be better to raise their scores.”

On his previous experience as Director of the Holocaust Museum’s Education Center:

“The one thing you become attuned to at the Holocaust Museum is the uses and misuses of history. So you really see how governments, particularly in the lands the Holocaust has happened, take efforts to twist the history to avoid particular country facing the hard truth what happened in that country….The crimes of a country are often part of the authoritarian playbook, whether it’s China or Russia.

On the future of Freedom House:

“Our angle’s really to support the people doing the work on the ground to help defend the world democracy. So we’re going to double down on that. We’ve always believed in strong US leadership and human rights, so we’re really pushing for that to install US democratic practice. But I think, doubling down on that, one of the just administrative things we need more support to support this stuff. We’re funded by governments, by corporations, by private individuals. We’d like to develop a more private fundraising operation — that’s one of my big goals of Freedom House. But I think the world is in a dangerous place. I actually happen to become an optimist. I do think if you look at places like what’s happening, Hong Kong, on the ground and Russia, Sudan — which is a country which has a lot of trouble for the last 30 years — you do see signs of a kind of a potential democratic Renaissance and we really need to support nurture that.”